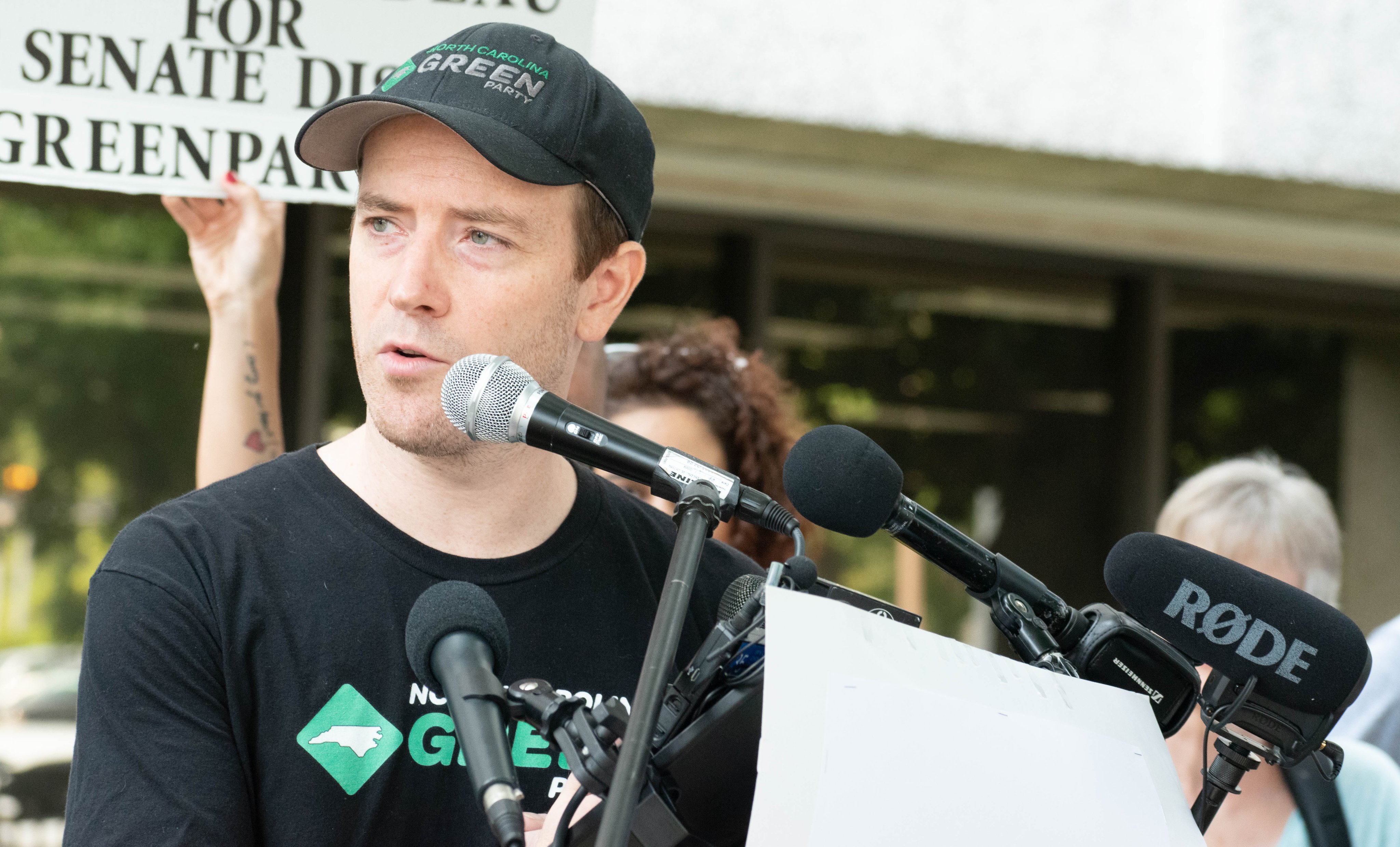 I was born in Saint Paul, Minnesota, and in 2012 found my home here in Cary and my political home in the North Carolina Green Party (NCGP) soon after. I’m a graduate of Saint Paul Central High School, the University of Minnesota–Twin Cities, and Emerson College in Boston. I work independently as a book editor, contracting primarily with left/progressive/socialist publishers. I’m married with a son in Wake County Public Schools.

A “progressive” turned ecological socialist, I’ve been involved in antiwar, anticorporate, and environmental activism for over 20 years. I’m running for NC State Senate to give people who typically don’t vote a reason to vote and to help build the NCGP into a mass party that puts people and planet first and capitalism in the dustbin.

An organizer with both the 2016 Jill Stein / Ajamu Baraka and 2020 Howie Hawkins / Angela Walker Green presidential campaigns, as well as the 2022 Matthew Hoh for Senate campaign, I’ve worked tirelessly to win ballot access for the Green Party particularly in North Carolina and Missouri, as well as across the country, because I believe we cannot win socialism or even progressive reforms without a mass-membership, anti-capitalist party that challenges the capitalist two-party racket. 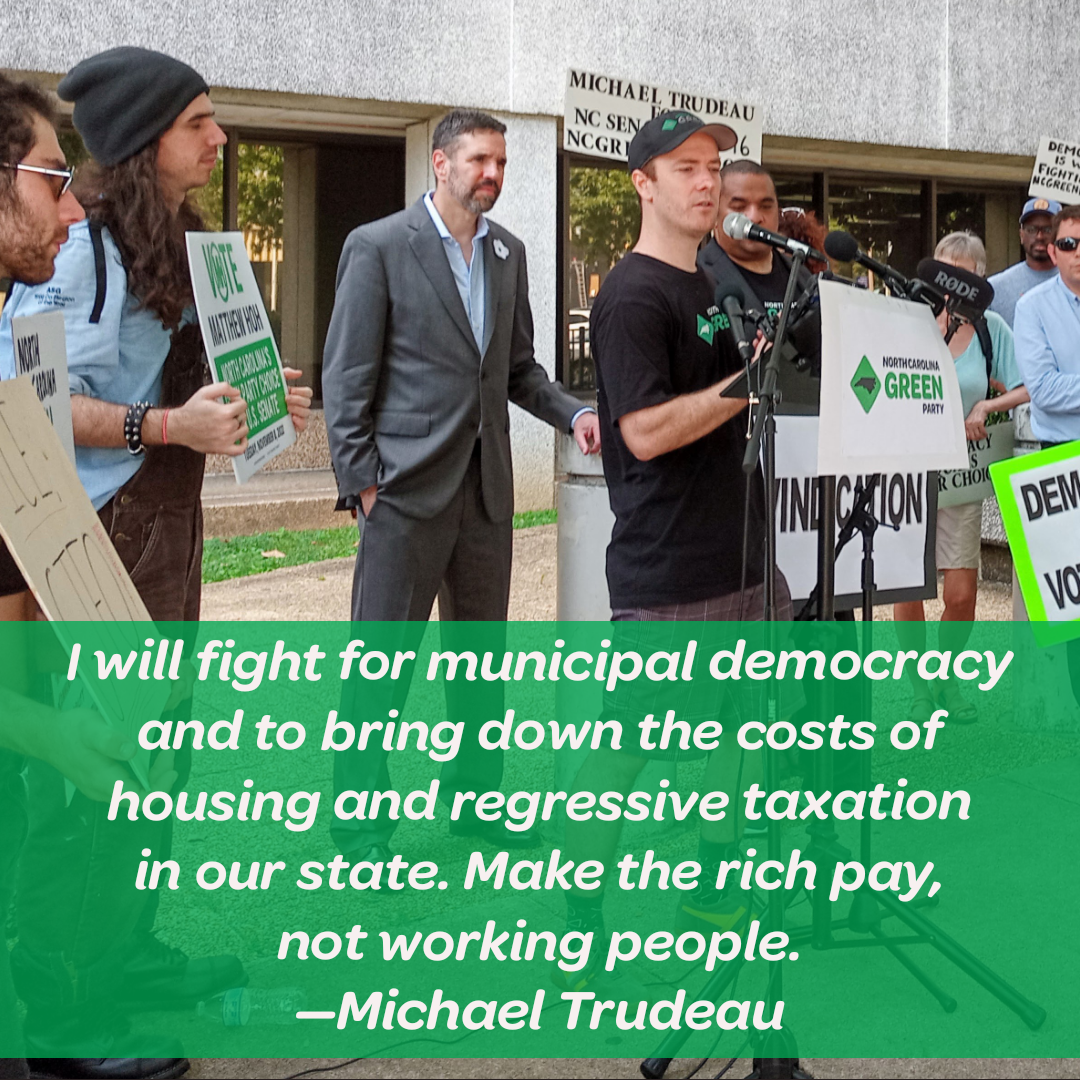 Build the North Carolina Green Party: North Carolina is not a democracy—two capitalist parties run it, denying the people access to basic social services, as well as to the ballot and the ballot box. I’m running primarily to build an institution—the NC Green Party—to counter the two parties and provide real solutions for and from working-class people. Win or lose the election, we win by building people power.

Education: North Carolina schools rank 33rd overall in the nation. Teachers’ salaries should be increased to attract and retain great teachers so that our children develop critical thinking, empathy, and cooperation in a changing world. Education should be a public service for the public good, not a money-making enterprise that diverts public funds into private coffers, often through charter schools that have run afoul of their charters and undermine public school funding.

Economy: Nationalize major NC-based industries and corporations, reforming their charters to eliminate private profits and to distribute such surpluses to serve the people and the public good. Mandate a statewide living wage of at least $22 an hour.

Environment: Improve North Carolina’s environmental quality significantly by making energy and environment public goods, not opportunities for private profiteers. Our natural resources have been plundered by Duke Energy in particular, which operates criminally. As a criminal organization, its assets should be seized and redistributed to the people and to environmental replenishment.

Healthcare: North Carolina ranks 39th in the nation when it comes to healthcare, and the US ranks 22nd in the world despite spending more per capita on “healthcare” than any other country. To stop this, we’ll declare healthcare a human right in North Carolina. In the absence of a National Health Service, we’ll institute a statewide North Carolina Health Service, making healthcare free or very low cost, or both, to all residents and visitors, regardless of citizenship, and accountable to the people, not shareholders.

How would you like to volunteer? Tell us more about yourself.