Howie Hawkins and Angela Walker for President and Vice President

VOLUNTEER FOR HAWKINS/WALKER IN NORTH CAROLINA! 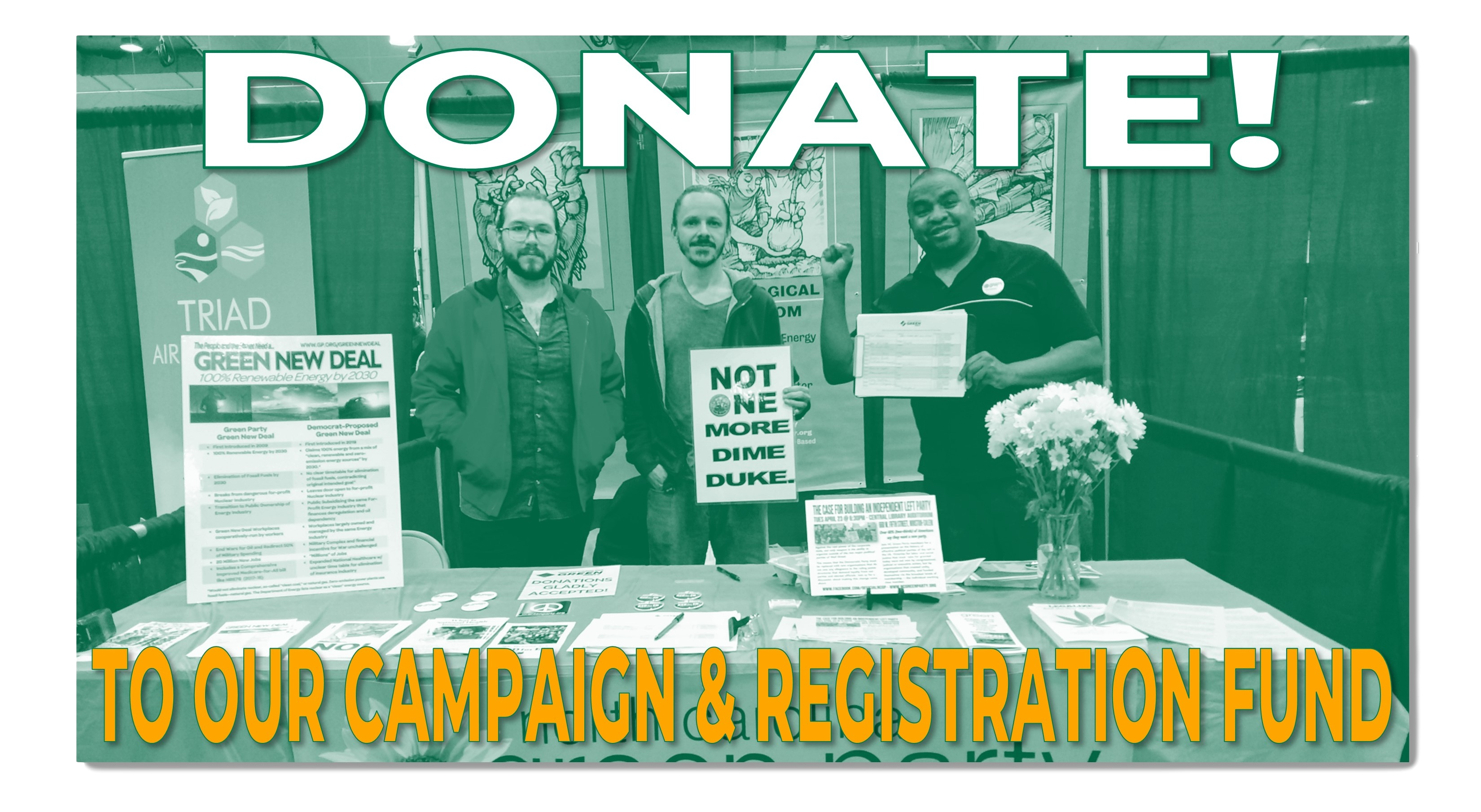 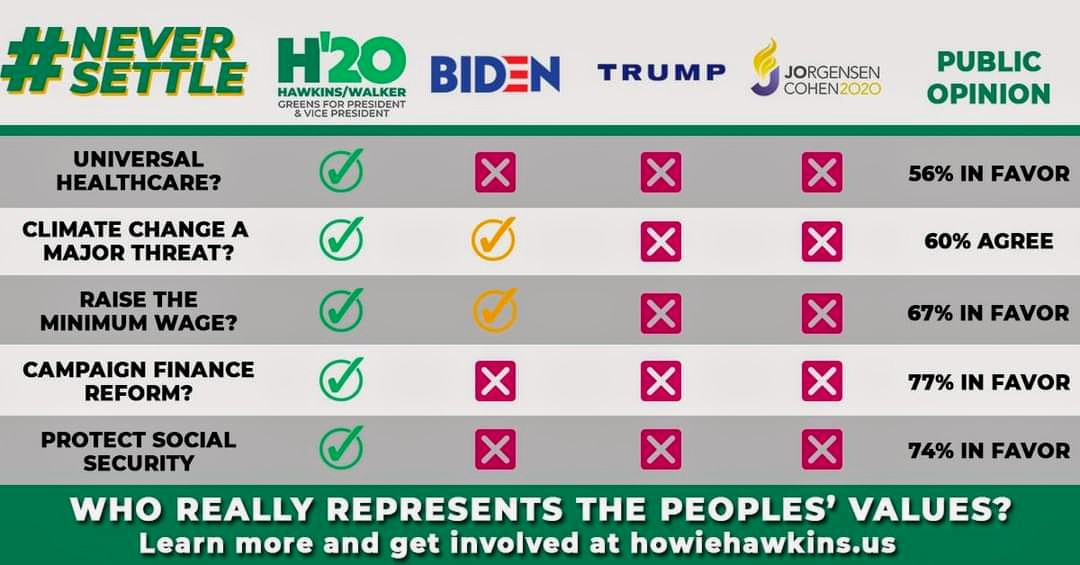 Hawkins is a longtime Green from New York. He was the first candidate to run on a fully developed Green New Deal in 2010, combining an Economic Bill of Rights to jobs, income, housing, health care, and education with 100 clean energy by 2030 in order to reconstruct the economy for economic justice and climate safety. He was the only Green presidential candidate who met the requirements to be recognized by the North Carolina Green Party and thus the only presidential candidate who appeared on the NCGP's primary ballot. On March 3, 2020, Hawkins won the North Carolina Green Party presidential primary with 66.97% of the vote.

From the start, Howie has been committed to independent working-class politics for a democratic, socialist, and ecological society. He supported the Peace and Freedom Party in 1968, the People’s Party in 1972 and 1976, and the Citizens Party in 1980. Since that first national meeting in 1984, Howie has been a Green Party organizer.

As the Green Party’s candidate for governor of New York in 2010, 2014, and 2018, each time he received enough votes to qualify the Green Party for a ballot line for the next four years!

Outside of electoral politics, Howie has been a constant organizer in peace, justice, union, and environmental campaigns. 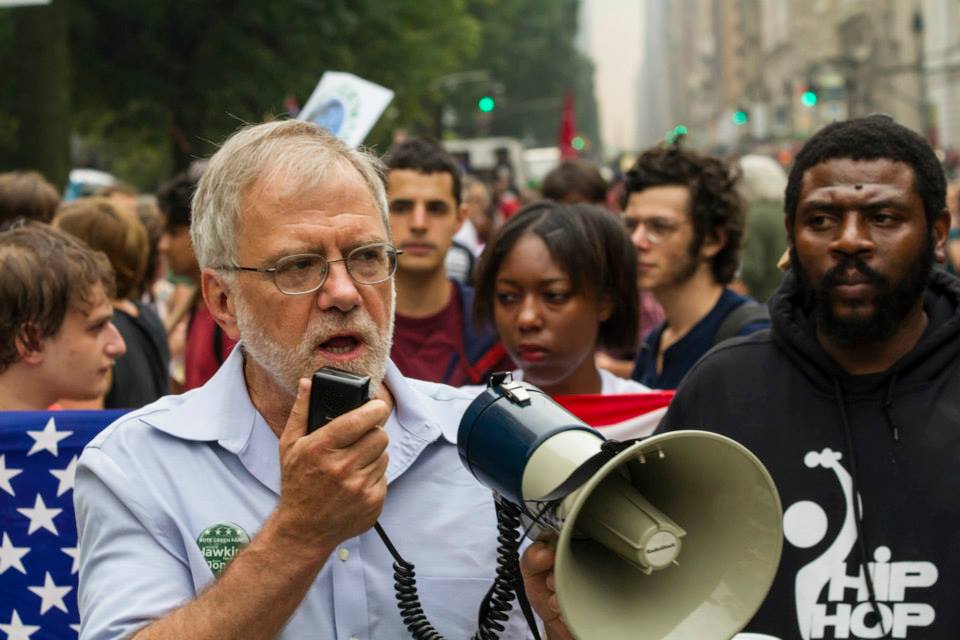 When his draft number was called in 1972, Howie enlisted in the Marine Corps while continuing to organize against the Vietnam War. He remains a member of Vietnam Veterans Against the War as well as a member of the American Legion Dunbar Post 1642 in Syracuse.

After studying at Dartmouth College, Howie worked in construction in New England in the 1970s and 1980s. He helped organize a worker cooperative that specialized in energy efficiency and solar and wind installations.

When the Socialist Party of Eugene Debs, A. Philip Randolph, Helen Keller, and Norman Thomas re-established itself as an independent party in 1973, Howie joined and remains a member. He is also a member of Solidarity, which promotes “socialism from below” and international solidarity because the fight for freedom against all dictators and imperialisms is worldwide and indivisible.

Howie was a co-founder of the anti-nuclear Clamshell Alliance in 1976. In the 1970s and 1980s, he was also a leader in the anti-apartheid divestment movement to end US corporate investment in the racist system of oppression and labor exploitation in South Africa.

Howie moved to Syracuse in 1991 to develop cooperatives for CommonWorks, a federation of cooperatives that promoted cooperative ownership, democratic control, and ecological sustainability in the local economy.

From 2001 to 2018, he worked as a Teamster unloading trucks at UPS. Now retired, he remains a supporter of Teamsters for a Democratic Union, US Labor Against the War, the Labor Campaign for Single Payer Healthcare, the Labor Network for Sustainability, and the Labor Notes network.  Howie’s articles on politics, economics, and environmental issues have appeared in Against the Current, Black Agenda Report, CounterPunch, Green Politics, International Socialist Review, Labor Notes, New Politics, Peace and Democracy News, Roll Call, Society and Nature, Z Magazine, and other publications. He is the editor of, and a contributor to, Independent Politics: The Green Party Strategy Debate (Haymarket Books, 2006). 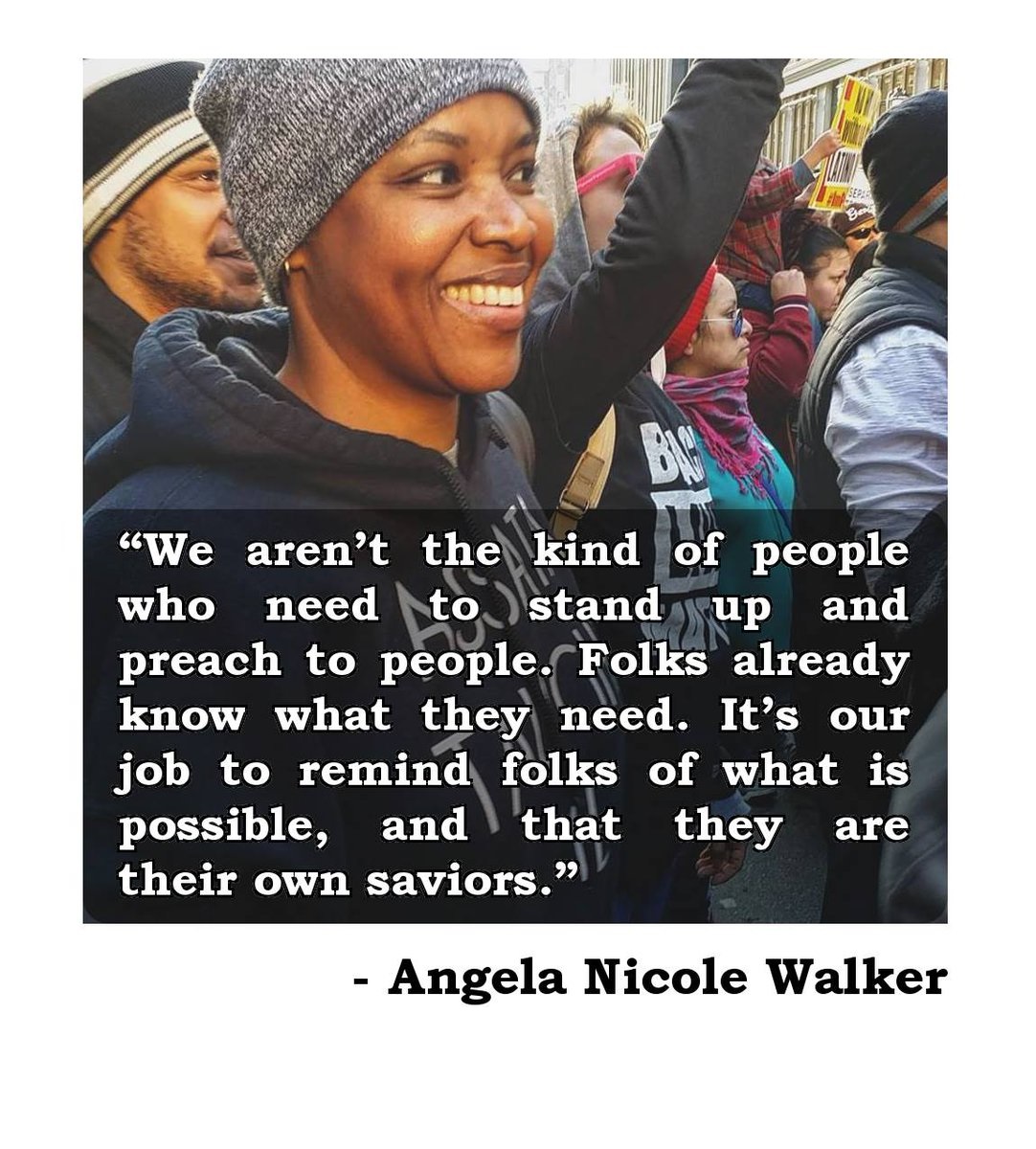 Angela Walker is an independent socialist who describes herself as “a Fred Hampton, Assata Shakur socialist.” She was born and raised in Milwaukee, Wisconsin to a working-class Black family. She learned early that though money was necessary to live in this society, it was less important than integrity, cooperation, and dignity. This upbringing shaped the activist and organizer she later became. . . .

The first mass mobilization Angela attended was during the demand for the recount of ballots in the 2000 Florida election. She joined a contingent of people who traveled to Tallahassee, Florida to protest widespread discrepancies with the ballots in the election. That experience marked the first of many protests she would attend, and illustrated the power of people coming together to stand up for their rights. In subsequent years, Angela would participate in actions against the war in Iraq in New York and Washington, DC while a driver for Greyhound Lines.

In 2009, she returned to her home city and began work with the Milwaukee County Transit System. In 2011, newly elected Wisconsin governor Scott Walker launched an attack on unions from the state capitol, Madison. Thousands of union workers and their supporters occupied the Capitol building and grounds in protest. Angela, a member of the Amalgamated Transit Union Local 998, was among the protesters. As a result of her involvement in the protests, the then-president of her union local appointed her Legislative Director for the local.

As Legislative Director, Angela served for two years. During this time, she helped make the union part of the Occupy Wisconsin and Occupy the Hood movements, she marched with union officers in support of striking Palermo’s Pizza workers, and participated in actions with the Fight for 15, postal workers, educators, healthcare workers and striking machinists in Manitowoc, Wisconsin. She helped organize efforts to inform transit riders about proposed cuts to service and transit access, and assist in securing the necessary funding for the transit system. Angela fought for basic funding for the Milwaukee County Transit System by speaking at state legislative hearings, advocating for working families.

In 2014, Angela was approached by Rick Kissell, a lifelong socialist and friend, to run as an independent socialist against the cowboy-hatted incumbent, Sheriff David Clarke. The campaign served as a platform to discuss the root causes of crime in Milwaukee, which included the incarceration of people for nonviolent marijuana offenses, the reduction of access to adequate healthcare, un- and underemployment in the inner city, blighted neighborhoods created by foreclosures, and the pervasive systemic racism at the core of these issues. The campaign earned twenty percent of the vote in the election and got the attention of movements across the country.

Angela went to work for Wisconsin Jobs Now in 2015, as Community Campaigns Coordinator for the organization. Her work focused primarily on resistance to the privatization of public schools in Milwaukee. During her time with the organization, she was approached by Emidio “Mimi” Soltysik of the Socialist Party USA about running for Vice President of the United States. She agreed to be Mimi’s running mate for the 2016 election.

Angela Walker is the mother of one, and the grandmother of five. She is a fierce advocate for the rights of Black, Brown and Indigenous people, the LGBTQIA community, Labor and the Earth itself.

How would you like to volunteer? Tell us more about yourself.