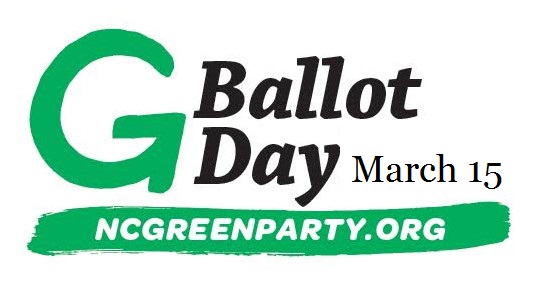 On presidential Primary Day, Tuesday, March 15, 2016, we will stage a political intervention.

RSVP for it here!

The Democrat-Republican corporate duopoly does not serve our needs. Over 28% of North Carolinians do not identify with either party. North Carolina needs more choices—choices that are not addicted to corporate money and the cycle of havoc it has caused.

The North Carolina Green Party will intervene by mobilizing 100+ activists to collect signatures on presidential Primary Day 2016 at polling stations to get the Green Party on the ballot. These activists will be:

-Green Party members
-Supporters of Dr. Jill Stein, Green Party candidate for president
-Libertarians, who'd rather have a real debate against Greens than a staged duopoly debate
-Other third parties, who know that if Greens can do this, then they will be able to as well
-Supporters of fair elections such as Free the Vote North Carolina
-Anti-capitalists who know the system is rigged for the 1%
-People who believe in peace and oppose the military–industrial complex and funding of war criminals
-Opponents of police militarization, private prisons, and the police state
-People of color who know the two-party corporate system is complicit in institutional racism
-LGBTQIA+ people who know the Green Party has stood up for their rights before the Republicrats
-Environmentalists who know we must act now to save the planet from human-induced climate change
-People who want clean, green, stable jobs
-Laborers who want the right to unionize in North Carolina
-Students who want to abolish student debt and get rid of a homophobic UNC president
-Persons with disability who want access to better coverage and equal paying jobs
-People that know drugs are a medical issue not a criminal issue—that pot should be legal
-Supporters of "home-rule" who understand the Democrat-Republicans in Raleigh don't know what's best for our communities
-And so many more

Together, the Green Party will get on the ballot and stay there, allowing radically different candidates to run for office.

North Carolina will have four options in 2016. We look forward to debating the Libertarians on the many significant things that we disagree on. The Green Party looks forward to running candidates to speak up for the people of North Carolina, and how the duopoly of Republicans & Democrats have not best served the people.

Until then we are all staging an intervention on this broken two-party system that has not worked, is not working, and will not work.

RSVP here to collect signatures on presidential Primary Day, March 15, 2016, at a polling station near you to get the Green Party on the ballot.